Gay friendly & other beaches in Istanbul 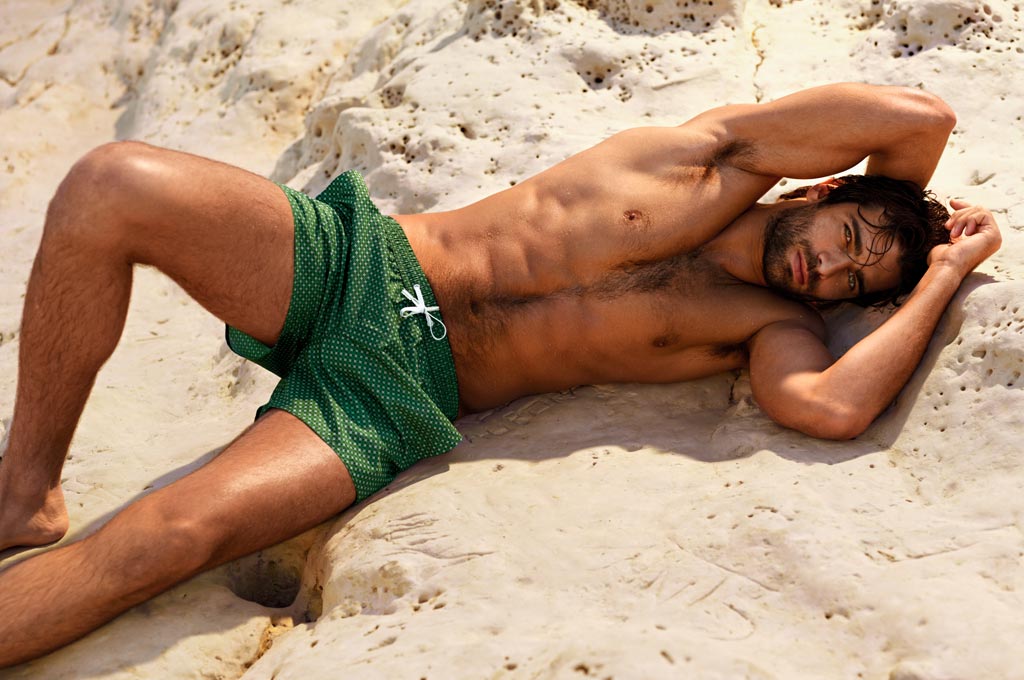 Istanbul is surrounded by the sea all around it but because of the pollution caused by its population over 12 million people there are very few beach areas left in Istanbul suitable for swimming. Most of these cleaner beaches are not very close to city center. As a matter of fact the people living in Istanbul themselves go to the cities and towns in Southern Turkey such as Bodrum, Antalya, Marmaris, Fethiye  etc for their summer holidays. There are no beaches in Istanbul visibly frequented by gay people, but there are some swimming areas where it's more likely to come across other gay people.

Kinaliada
The isolated beaches in Buyukada and Kinaliada are opted by some gay men in Summer, although there is not any obvious gay scene. Kinaliada is the first stop of public ferryboats running between Eminonu and Prince's Islands. In Kinaliada the beach far behind the island is more suitable for cruising. Sometimes, it is even possible to see few nude guys at some part of beach. After getting off from the ferryboat, walk right-hand side along the cost, climb up the road after the public beach area ends, and continue until you see comparatively less crowed beach down ahead of you (see below Google map). This means at least half an hour walking from the ferryboat station, but it is fun if you like walking. There may still be families on weekends in this part also especially on Sundays; therefore the week-in days may be better for cruising. In general, the beaches in Prince's islands get busy from June until late September. The islands are usually safe but you still need to be cautious in this isolated part. See below for general information about Prince's Islands and ferry boat schedules.

Attention: Kabatas ferryboat pier was closed due to extensive renovation in August 2016 and will not be serving until mid 2018 expectedly. The ferry lines from Kabatas were shifted to ferry piers in Besiktas and Eminonu. Click here for relevant news article.


Sarayburnu
Sarayburnu (Seraglio Point) is coastal area behind Topkapi Palace with respect to Sultanahmet. It is actually not a beach but a waterfront by the coastal road, covered with big rocks and concrete waterfront. There is no visible gay scene here also. It is not a place recommended for swimming especially. There are singles or groups of guys drinking and young ghetto boys swimming and lying on the rocks in summer time. Some local gay men hang out here frequently in Summer. If your hotel is in Sultanahmet, you can try this place for a couple of hours in early evenings, at least to get a little sun tan. Do not stay long after dark. When you come from Sultanahmet walk into Gulhane Park's main gate from the tramcar street, and get out from the gate at the other end of the park. You will be right there.

Kadikoy Mendirek (Breakwater)
The breakwater & light house in Kadikoy (major district of Istanbul on the Asian side) is already a gay cruising place in the evenings. This would be the last place to be recommended for swimming activity, actually. It is a thick concrete wall on the sea with big rocks on one side, and the water is really polluted. So, do not go there with your creams, towels and sac de plage. In day time, you may see some people lying on the rocks or sun bathing, and some others fishing or drinking. If you are visiting Istanbul just for a couple of days, this is not a place to be visited particularly. But if you happen to go to Kadikoy for some reason, you can try it once. It is located right near the ferryboat pier. If you are staying in Sultanahmet you need to take the ferryboat from Eminonu port, which will be there in 20 minutes. If you are staying in Taksim, take the funicular from Metro station to Kabatas pier for ferryboats to Kadikoy. You can also go to Kadikoy from Karakoy ferryboat pier which is next to the northern foot of Galata bridge.

Yesilkoy Beaches
There are several beaches around Yesilkoy district, close to Ataturk Airport on the European side of Istanbul. There is Florya Gunes beach which requires entrance fee.  There is also Ciroz Public beach and several other public beaches around Yesilkoy, where some local queers would go to hunt young horny ghetto boys, whom may also be problematic if you do not know the culture. Better stay away from crowded groups. Its may be more prolific on weekends, especially on Sundays. Again you need to walk to less busy parts of the beaches, to the rocky areas. There are dolmus cabs (a kind of shared-taxi) to Yesilkoy from Taksim, which depart from one of the streets next to the flower shops at Taksim Square. There are also IETT public buses from Taksim and Eminonu passing along these beaches.

Other beaches in Istanbul

Adalar (Prince's Islands)
Adalar is the plural for "ada" which means island in Turkish. This a group of small islands in Marmara sea close to the main land on the Asian side. The beaches on these islands seem to be the only swimming option left close to the down town Istanbul. They consist of 9 islands, 4 of which are considerably popular and inhabited. Private cars and motor vehicles are not allowed on any of the islands. So you need to walk, hire a bicycles or Fayton (a traditional horse-drawn carriage) to get around.

Majority of the native inhabitants of these islands used to be non-Muslim citizens of Ottoman Empire (Jews, Greeks, Armenians) until the end of 19th century. Now there are mansions and summer houses of rich men of Istanbul. Buyuk Ada (Grand Island) is the biggest one as the name suggests, and it is the most vibrant one. There are public ferryboats to Adalar from Kabatas pier on the European side (closer to Taksim, easily accessible from Sultanahmet by tramcar) and from Kadikoy and Bostanci districts on the Asian side. The journey takes 30-45 minutes by boat from Kabatas. The ferryboat from Kabatas stops on each inhabited island one after the other, in order of Kinaliada, Burgaz, Heybeliada and Buyukada. You can do hop-on hop off in this order between the islands by taking the next arriving ferryboat. On return way, the ferryboat does not stop on other islands after departing Buyukada. If you are staying around Taksim, you need to take the funicular line (Finukuler) from Taksim subway station to Kabatas first, which takes no more than 5 minutes.

Attention: Kabatas ferryboat pier was closed due to extensive renovation in August 2016. The ferry lines from Kabatas were shifted to ferry piers in Besiktas and Eminonu. Click here for relevant news article. 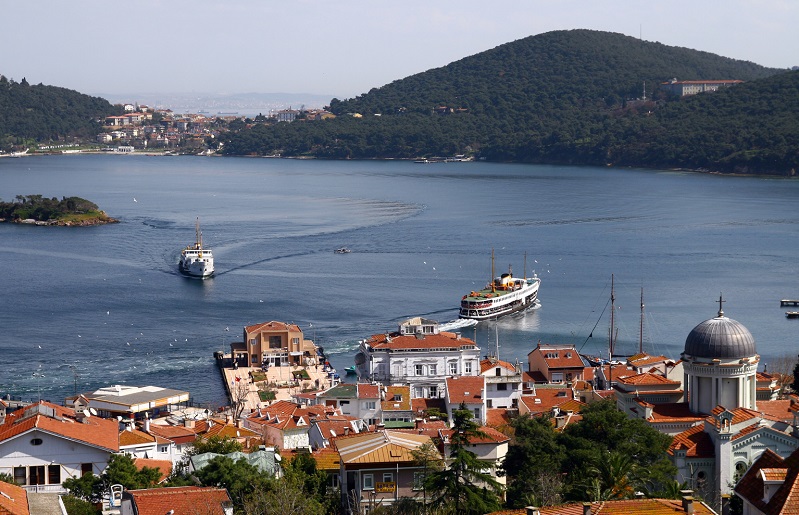 Kilyos Beaches
Kilyos is a small fishing village by the Black Sea shore of Istanbul on the European side, which is surrounded by green forests all around it. It has sandy beaches, hotels, pensions, cafe and restaurants. Roughly forty five minutes drive from down town Istanbul, the village is a good option for an escape from big-city life at least for an afternoon. Especially preferred by the local people living on the European part of Istanbul, it is a perfect place for nature lovers who would go there for swimming and picnic. The sea of Kilyos is rather chilly and wavy and there is flow in some parts. It not advised to swim very far from the shore especially in isolated parts of the beaches for this reason. To get to Kilyos by car, you need to pass Buyukdere and Sariyer districts driving through the Belgrade Forest. The road from Buyukdere passes through one of the arches of Egrikemer, the "Bent Aqueduct" built in 1732. If you have time to visit outskirts of Istanbul during your holiday, you can take a public bus to Sariyer first, departing from Taksim and Kabatas. You can find dolmus cabs, public bus or taxi to Kilyos from there. But the most enjoyable journey would be taking the morning Bosphorus cruise (Bogaz turu) of IDO with public ferryboats from Eminonu to Sariyer before getting to Kilyos, some 15 km away. Bogaz turu takes a little over an hour and stops in Besiktas (not far from Taksim, if you want to get on the ferry here) and several other small towns and villages along the Bosphorus. You can use public buses + M2 Metro Line on return. This would be a good and cheaper combination of a Bosphorus cruise and a daily beach adventure. On the way back you can also stop in Sariyer district for a a cup of Turkish tea in a sea-side cafe or eat fish in a small restaurant, to end your day as a life-time memorable one.

Sile Beaches
This is a lovely resort town on the Black Sea coast on the Asian side, 50 km from Uskudar (a district by the Asian shore of Bosphorus, across from Besiktas). The famous, extensive beaches of Sile are reached partly by a motorway, and partly by a narrow road winding through the forest. The ruins of a Genoese fortress and the lighthouse are also worth seeing in Sile. To the west of the town the beaches extend uninterrupted, and to the east there are a series of small, sandy bays. The summer months are quite crowded and lively. The breakwater of Sile can be cruisy for gay men in the evenings, whereas it is advised to be cautious and make good observation before meeting anyone. It may take more than an hour to get to Sile from European side of Istanbul, so it is recommended only if you have plenty of time to spent in Istanbul. A daily visit is possible in practice, but accommodation is readily available in the numerous hotels and pensions if you have time for an overnight stay or longer. There are public buses (Bus line 139) to Sile from Harem Otogar (intercity bus terminal) on the Asian side. You can go to Harem by ferryboats from Sirkeci ferry pier near Sultanahmet.

Comments:
"There is an unofficial nudist beach in Sile (Istanbul) Uzunkum vicinity: Uzunkum is long beach. at the beginning there is some clubs. take sea your left and walk along the beach. Pass small island and keep walking until rocky section. Pass this rocky part. another beach start. at the end of this beach nudity is possible especially weekdays. At weekend you have to keep walk along another rocky section. after rocky section small sandy beach accessing only shore. Its little bit difficult so sea shoes must be worn. At 2014 summer weekend and 2015 summer weekends skinny dipping was possible. From Istanbul you can use public transportation start from uskudar area."