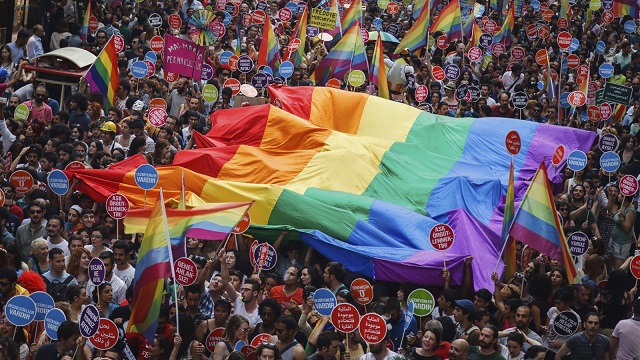 If you have not been to Istanbul before, it is recommended to start with understanding the special gay culture of this city. Being the most crowded city of Turkey, Istanbul is the heart of Turkish gay life. Although Turkey is undergoing a rapid change, certain things are still very traditional and peculiar in this country. The gay culture is a good sample of this. Taking immigration from all over the country, Istanbul is a summary of the whole Turkey.

Istanbulgay.Com is published by local people living in Istanbul and updated frequently with the latest information about the gay venues in Istanbul which you can not find anywhere else. We are not only listing the existing venues, but also the places which have already been closed down for various reasons, still being listed on other websites and printed gay-guides as well.

Turkey has got a traditional bisexual or hetero-flexible culture taking its root from the history. The classic gay relationship is between real gay men and bi-curios men. In this traditional culture these bi-curious men would not define themselves as gay or bisexual and the passive partners are usually appreciated to be young, glabrous an slightly feminine. Hetero-flexible / bisexual guys are supposedly top and do not have sex with each other. This gay culture is kind of similar to historical buggery or sodomy culture in the western countries. As a result of this bisexual culture, there is a big transvestite & transgender society in Istanbul and in other big cities of Turkey. In the last 20-30 years Turkish gay culture has been westernized rapidly and sexual interactions between gay people have become more common. In fact there is still not a sharp distinction among the sexual orientations. The border-line is very transitional between straight, bisexual, gay, queer, transvestite and transgender people.

According to the statistics Istanbul is listed among the safest metropolises in the world. But naturally, there are some risks in gay and night life just as in other big cities of the world; and you can bump into bad guys along the way. As long as you know what is happening and behave accordingly, you do not need to worry too much. Not surprisingly, the most common criminal incident in gay life is small-scale thefts (mobile phones, cash money etc). Theft and robbery incidents are more likely to take place in isolated cruising spots or when you go somewhere with someone about whom you know nothing. Of course these things are not happening everyday and should not discourage you from meeting people but just in case it is advised not to carry valuable belongings and a lot of cash on you when you go out for cruising especially in outdoor places such as parks. Do not go with local people to their places, as much as possible. Prefer public venues such as cheap hotels, bath houses and saunas, if your own hotel is not suitable. Naturally, you should be more careful if you date someone via internet or gay dating applications, just like you should be anywhere else in the world. The most popular dating app among Turkish LGBTQ people are Hornet, Growlr and Turkish-owned Gabile.

There are several other potential risks for tourists, regardless of being gay. First of all, avoid some tourist-hustlers who usually hang around Taksim and sometimes around Sultanahmet districts. They will try to convince you to go to some scam night clubs to rip you off. Your bill can be up to several thousand Euros depending how far you follow your basic instincts instead of your logic. There are few night clubs like that but their hustlers are always around who are said to be taking commissions. Briefly stay away from people who are too friendly all of a sudden, no matter what their stories are.

It is of minor importance but there is a new tourist trick played by some fake shoe-shine men walking about some main streets. They deliberately drop their brush and keep walking as if they are unaware; so that you pick it up and give it to them. Then they try to look very grateful and suggest you to shine your shoes, as if returning the favor. But they do want money at the end - even more than normal shoe-shine price. It is just a silly but annoying confidence trick, in other words.

Another less possible scam risk is dishonest taxi drivers. Some taxi drivers may over-ride tourists to charge them more. Although rarely it is also heard that some drivers may also switch the big banknotes with smaller ones, and blames you for giving the smaller note. It is better if you really pay them with small banknotes, indeed. If you have a problem with taxi drivers, write down the plate number of the taxi explicitly (make sure he understands), and try to tell him that you will go to the police ('police' sounds the same in Turkish). If you do not want to experience such headaches on your holiday it may be wise to ask taxi driver how much you will pay for the place you go before you get in. You can also ask your hotel's staff to call you a familiar taxi driver, if they can..

If it is your first time in Istanbul, it is recommended to make a discovery tour to find the locations of gay bars and clubs in day time. It is not wise to ask people directions at night, because you can bump into a crook or get lost in risky back-streets. If you can afford, we highly recommend you to hire a private guide from this Turkish travel agency which operates gay friendly tours for more than 10 years.

In general feel at home and even be a little snob when necessary. Make sure that there is law in this country, and fight for your rights if needed. In fact ordinary Turkish people are very hospitable and nice people, but do not expect everyone you meet will be like that in such nightlife or tourist districts of the city. Istanbul is a big metropolis ultimately, where you can meet any kind of people.

The gay events and activities have become more visible since late 80's. The number of the gay venues increased rapidly in recent decades. Vicinity of Taksim quarter of Beyoglu town on the European side of Istanbul is where almost all major gay venues are located. In fact, this district is the center of night life in general. There are many gay bars, night clubs, gay-friendly saunas and Turkish baths around Taksim. This gay neighborhood is also frequented by many gay-for-pay rent-boys. Some of these escort boys can be very handsome, but caution is highly advised. There are also a number of clubs exclusively for transvestites and transsexuals and their admirers around Taksim neighborhood. Indeed, the gay life of Istanbul is very colorful and vibrant. Istanbul is hosting gay parade every year since early 2000's, which is one of the biggest LGBT gathering in Eastern Europe. There are several LGBT solidarity groups in Istanbul, including Lambda Istanbul and SPoD. Lambda Istanbul is the first gay and lesbian organization of Turkey founded in early 1990's

Most Turkish people are a mixture of Caucasian (white) and Mediterranean in appearance. Although the majority of Turkish people have fair complexion you can also see many brunettes as well as blond people with color eyes. The major ethnicities other than Turks are people of Kurdish and Arab origin who still carry their characteristics despite considerable miscegenation by means of intermarriages in recent decades especially in big cities. Istanbul is a city of domestic emigration and houses a total mixture of all these ethnicities from all around Turkey, also including smaller non-Muslim minority groups such as Greeks, Armenians and Jews. Istanbul is in top 10 list of the most visited cities in the world, welcoming over 10 million tourist every year from all around the world. There are also considerable number of expats coming from variety of western countries living in Istanbul for work and other reasons.

Turkey is a constitutionally secular country and there is not any law against homosexuality since founded in 1923. Even though sexual orientation is not being mentioned specifically an anti discrimination law (5237/122) enacted by the parliament in early 2000's can also be used by Turkish LGBT people to protect their rights. The first significant implementation of this law was in 2015 against a bath house owner who refused to offer service to a Turkish transgender woman. Also in 2016 an openly gay Turkish referee won a landmark lawsuit against Turkish Football Federation following his dismissal in 2009. Since the beginning of 2010's two of the major opposition parties have been openly supporting LGBT rights and they have even presented few LGBT candidates in local and general elections.

The age of consent is 18, which also applies as the age limit to be able to enter bars and clubs selling alcohol. Regardless of the sexual orientation, any sexual intercourse with someone below the age of consent is regarded as pedophilia and it is illegal even if it is done with the approval of the minor partner.

The official numbers of HIV + people in Turkey is still stated by just a few thousands, Istanbul being the leading city, naturally. A total of 15000 people are diagnosed to have Aids/HIV virus by 2018 in whole of Turkey, according to the statistics of the Ministry of Health; and homosexuals hold a very small percentage (around %10) of these official numbers. But the real number should be much bigger than this. Majority of Turkish society is still conservative about certain things and HIV is still regarded as a sexual disease. Less-educated part of the population are not very knowledgeable/careful about safe sex. Consequently the people either do not take any HIV tests or tend to hide themselves, and it is not very possible to obtain accurate numbers. Regardless of the accuracy of these numbers Istanbulgay.Com supports safe sex all over the word.