A brief history of Istanbul

Mythology
The legend of the foundation of Istanbul is derived from classical mythology: Zeus fell in love with Io, the daughter of Inachus, King of the City of Argos and God of the River of Argos. The King of the Gods temporarily transformed the girl into a heifer in order to protect her from the wrath of his wife, Hera, Queen of the Gods. In her wanderings Io crossed the Bosphorus, giving the strait its name (''boos-foros'',''cow-ford''). After reassuming her original form, she gave birth to a girl, Keroessa. Later, Keroessa bore the son of Poseidon, sovereign deity of all waters from the Pillars of Hercules to the Hellespont. Keroessa's son, Byzas the Magerian, in time became the founder of Byzantium and named the Golden Horn ( Chrysokeras ) after his mother.

Foundation of Istanbul
According to the archeological discoveries, Asian side of Istanbul was probably inhabited by people as early as 3000 BC. Eventually, in the 7th century BC, Greek colonists led by Byzas established the colony of Byzantium on the European side at the peninsula, today known as the Seraglio Point, where the Bosphorus and the Golden Horn meet and flow into the Marmara ( 667 B.C. ). Another legend has it that, Byzas chose the spot after consulting Oracle of Apollo at Delphi who told him to settle across from the "land of the blind ones." Indeed, Byzas concluded, earlier settlers must have been deprived of their sight to have overlooked this superb location at the mouth of the Bosphorus strait. This proved an auspicious decision by Byzas, as history has shown Istanbul's location important far beyond what these early Greek settlers might possibly have conceived.

In the early 100's BC, it became part of the Roman Empire and in 306 AD, Emperor Constantine the Great  made Byzantium capital of the entire Roman Empire. From that point on, the city was known as Constantinople.

The mid 400's AD was a time of enormous upheaval in the empire. Barbarians conquered the western Roman Empire while the Eastern, also called the Byzantine Empire, kept Constantinople as its capital. In 532 during the reign of Justinian I, antigovernment riots destroyed the city. It was rebuilt, and outstanding structures such as Hagia Sophia stand as monuments to the heights Byzantine culture reached.

The attribute that made the city so desirable, its incomparable location for trade and transport between three continents, was also its nemesis. For the next several hundred years Persians, Arabs, nomadic peoples, and members of the Fourth Crusade (who for a time governed the city) attacked Constantinople.


Ottoman Era
Finally, weakened by almost constant battle, the Ottoman Turks successfully conquered Constantinople in 1453. Renamed Istanbul, it became the third and last capital of the Ottoman Empire. It was the nerve center for military campaigns that were to enlarge the Ottoman Empire dramatically. By the mid 1500's, Istanbul, with a population of almost half a million, was a major cultural, political, and commercial center. Ottoman rule continued until it was defeated in world war one and Istanbul was occupied by the allies.

In the year 1453, the army of Ottoman Sultan Mehmed II (Mehmed the Conqueror) conquered the city. The seventh and final Ottoman siege of Istanbul was carried out under the command of Mehmet II, the Ottoman Sultan historically known as Mehmet the Conqueror. Mehmet the Conqueror had the Rumeli Fortress ( Rumeli Hisari ) constructed on the European shore of the Bosphorus, directly across from the Anatolia Fortress, thus cutting off all Black Sea traffic in and out of the city. Nevertheless, Cardinal Isidore of Kiev, the Pope's envoy, arrived in Istanbul to seal the union between the Catholic and Orthodox Churches. This union, proclaimed by Constantinus in Hagia Sophia ( the Church of Holy Wisdom ), caused unrest among the devoutly Orthodox Byzantines, and popular opinion swayed strongly against the Emperor. Meanwhile, Mehmet the Conqueror moved his galleons over the land by means of specially constructed sleds and pulleys and the Byzantines woke up one morning to find the Golden Horn invaded by the Ottoman navy. Enormous shell-holes were torn in the ramparts through which the Sultan's soldiers entered the city and, by means of a temporary bridge built across the Golden Horn, they crossed into the heart of Genoese Galata. The entire battle took place between April 6 and May 29, and on this final day, Istanbul, once the capital of the Byzantine Empire, fell to the Turks. Mehmet the Conqueror, Sultan of the Ottoman Empire, was 21 years old and the city was 2120 years old ( 1453 A.D. )first of all, the oldest buildings and the formerly magnificent but dilapidated city walls were restored. On the ruins of the Byzantine foundations, the buildings of the basic institutions of the Ottomans were built. The great water system with its huge cisterns was repaired and returned to use. The city had developed its Ottoman identity, resembling its present character.

With the addition of the buildings of the famous architect Sinan, the city had again become the capital of a great empire. Together with the remaining population after the conquest, people coming from all over the empire, from all kinds of ethnic origins and religions, created a colorful mixture. In Istanbul - the new Constantinople - the cultural variety brought in by the immigrants enriched the cultural texture of the city. The bedesten where the merchants were settled and the many han where the craftsmen were to be found turned into centers that enabled this harbor city to develop trade with the outside world. Huge markets were built, further supporting trade. During the period of the height of Ottoman imperial power, the city was covered all over with tulips, in what is known as the" Tulip Era." In the 19th century, efforts modernization were undertaken. Istanbul entered the 20th century worn out and burdened by its history as the capital city of three great empires. At that time, the Ottomans were just about to end their imperial period of 630 years. 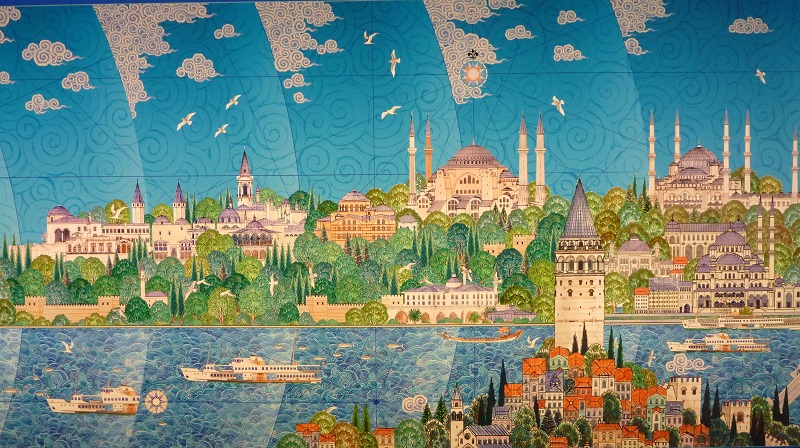 After World War I, resistance movements became active during the Allied occupation of Istanbul, an occupation that lasted for nearly five years. When the resistance movement in Anatolia finally gained success, the last of the foreign soldiers left the city on October 5, 1923. On October 6, the Turkish army entered the city heralding the message of a new government led by Mustafa Kemal Ataturk, the leader of the Turkish independence war, and his colleagues had made a decision in the new National Assembly that Istanbul would turn over its function as capital of the new nation to Ankara. Under republican rule, much new construction activity took place in Istanbul, starting with the building of family houses in the 1930s. In 1950s, more than 7300 buildings were torn down and the road system reorganized. This caused historic changes in the fabric of the city.

Famous Istanbul historian Jak Deleon writes about Istanbul in his book named 'The Bosphorus: A Historical Guide': ''From Byzantium to Constantinople and from then to Istanbul, this fabled city, divided by the Bosphorus strait, lies in both Europe and Asia. The European side is separated into two by a scimitar-shaped gulf called the Golden Horn: the old town sprawls along one side, with its Byzantine ramparts and Ottoman palaces facing the Marmara Sea, the Propontis of antiquity; on the other side, one can see the ancient Genoese port of Galata and the more modern quarters beyond, with the legendary Bosphorus winding its way up to the Black Sea, the Pontus Euxinus of antiquity. It is this garland of waters which makes Istanbul, whose seven hills are crowned with imperial monuments, a unique city.