There are always several venues around Taksim square which functions as meeting places for gay men in day time and early the evening evenings. Most gay men would spend their time in such places before they go to gay bars and clubs. They are mostly coffee shops and the managers / staff are not particularly gay-friendly.  There may also be rent boys and notorious hustlers of Taksim district in and around these venues, so please be selective with the people you happen to meet.  These are the most popular meeting points in recent years.

Simit Sarayi Taksim
Address: Tarlabası Bulvari No: 6  Taksim, Istanbul.
This is not a gay venue. It is a a branch of Turkish-owned tea house chain. There are many gays hanging around on the upper floor, mostly straight acting men and bears. Beware of some hustlers who also comes to this place..

Demiroren Istiklal
Address: Istiklal Caddesi  Taksim, Beyoglu, Istanbul.
Demiroren is a shopping mall in the middle of Istiklal Avenue,  Especially at the terrace floor and the top floor where there are coffee shops you can see some local gay men and rent-boys once in a while. It is an escape place when the whether is not nice in winter. There are many stores as well as a movie theater and places to eat the top floors

Burger King Taksim
Address: Istiklal Caddesi No:1  Taksim, Istanbul
It is perfectly located facing Taksim square and right at the start of the bustling Istiklal Avenue. It is a quick meeting point for gay and lesbian people but there is no visible gay-scene, since the venue attracts everyone because of its location. Be aware of some rent-boys and tourist hustlers hanging around inside and sometimes waiting in front of the entrance.

There are smaller, modest venues where you can find food or you can go just to have a drink.


Vegisso Vegan Cafe (12:00-22:00)
Address: Duatepe Mah Bozkurt Caddesi No: 23/1 Kurtulus, Sisli
Web: Facebook &  Instagram & Pinterest
Gay-owned, LGBT friendly vegan house-cafe located 5 to 10 minutes walking distance to Osmanbey / Pangaltı Metro Station, roughly 2 km from Taksim square in gay friendly Kurtulus district. Use the Pangalti exit if you come by metro. The venue does not have a sign-board so you will need to ring the the door bell at the bottom, once you find the building at the above indicated address (23 is building number on the street). They may be closed on some days, so better call or send a message via Whatsapp or Facebook before visiting. Their cell phone number available on their Facebook Page. This is the message sent by the owners describing their venue:
"We invite all LGBT people to our cafe & restaurant in Kurtuluş to chill out and socialize in our cozy garden. You can have breakfast lunch or dinner, or enjoy your alcoholic & non-alcoholic beverages in our venue. You can come to the movie screenings, gatherings and parties that we organize from time to time. It's an LGBT friendly venue."  (September 30th 2018)

These are above average restaurants that people would usually go on special occasions.


Besinci Kat Restaurant ( "The Fifth Floor") 09:00 – 02:00
Address: Siraselviler Caddesi, Soganci Sokak No:7  Kat 5 (5th floor) Cihangir - Beyoglu, Istanbul
Web: http://www.5kat.com/
This roof top restaurant-bar is on the 5th floor of the same building and offers a magnificent view of Istanbul.  Prices are not very cheap for an ordinary meal but it is reasonable for a special night-out dinner considering the painstakingly prepared meals and breathtaking view of Bosphorus straight and Asian part of Istanbul. Its also has a small bar usually busy in the evenings and open until around 01:00 am. Unlike the food, drink prices at the bar are cheaper than most gay clubs. It would make you feel special to know you are eating your meal or drinking a cup of wine on Europe, while watching the beginning of Asian continent laying in front of you.
Click here Tripadvisor reviews about this venue.

360 Restaurant
Address: Istiklal Caddesi, No: 163  Misir Apartmani, Kat 8 , Beyoglu - Istanbul.
Web: 360istanbul.com/  & Facebook.com / 360istanbul
The restaurant is named 360, referring to a view 360 degree. Although it is less than that, the sea view is breathtaking. Located on the top (8th) floor of historical building (Misir Apartmani) right on Istiklal Caddesi, close to Galatasaray square, across the high Odakule building, right before St. Antoine Cathedral. The prices are reasonable compared to the ambiance, but naturally not a place to eat daily. Recommended if you want to have a special dinner watching a great Istanbul panorama.

Feedback about this venue:
"Hello I went with my boyfriend to the 360° restaurant and the muscle man at the entrance treated us very badly saying " do you have a reservation ? do you know ladies ? no gay ! " we didn't feel welcome at all of course ! bad experience thanks for reading ! best regards " Posted by Serge from France on July 20th, 2011

Cok Cok Thai Restaurant
Address: Mesrutiyet Cad. No: 51, 34344 Beyoglu, Istanbul.
Web: http://www.cokcok.com.tr/
It is a Thai food restaurant located on Mesrutiyet street parallel to Istiklal avenue. When you walk from Taksim turn right from Galatasaray square, and take the first turn to left, and pass British Consulate. According to their own description: "The name Cok Cok precisely captures the wide variety of flavors found in each dish of this much talk-about restaurant. Established since 2006, it has fast gained followers both local and foreign. The fresh spices and herbs used in the cooking, purely Thai and South East Asian, relate back to the Silk Route that once connected with Istanbul, where the restaurant is now located."

Nar Pera Cafe & Restaurant (09:00- 24:00)
Address: Gonul Sokak, No: 9/B, Asmali Mescit, Beyoglu/Istanbul.
Web: Facebook.com / narpera/
Nar Pera is located in Asmali Mescit which is one of the popular cafe & bar neighborhood of Beyoglu district. It is at the end of the narrow street (Gonul Sokak) across the Russian consulate on Istiklal avenue. It is not a gay venue, but the managers like to welcome gay and lesbian people and indeed the staff is very gay-friendly. It has a multifunctional concept as cafe, bar and restaurant. The music gets slightly lauder after 10:00 pm. The food is perfect for European taste. The prices are average.

Other Visitor Comments and Suggestions:
Click here to read about some restaurants suggested by a member in our Google group on August 25th 2015

Develi Resturant
Address: Gümüsyüzük Sokak, No 7, Samatya/Istanbul Tel : 0 212 529 08 33/34
Famous restaurant for kebab lovers and to discover traditional Ottoman & Turkish cousin. No alcohol is served. It has opened many branches in other districts but the original location in traditional Samatya town is still the most popular one.
Web: www.develikebap.com/

Mikla Restaurant
Address: Mesrutiyet Caddesi No: 15, Beyoglu, Istanbul.
Located at the terrace of the Marmara Pera Hotel the restaurant has unique view of Golden Horn and Bosphorus. They describe themselves briefly as "The restaurant is funky retro with chrome 70's and 50's furniture and a stunning wooden rail-sleepers bar. Mikla is Urban, sleek and stylish; reflecting well Turkish and Scandinavian background of the restaurant's Chef-Owner."
Web: Miklarestaurant.com

Leander's Tower (Kiz Kulesi)
Famous 12th century stone tower erected on a rock in the middle of the sea (Bosphorus) which had served as a prison and a lighthouse is undertaken by private entrepreneurs is now being used as a cafe & restaurants after being completely renovated. Regular transportation is provided by boats from Uskudar and Kabatas, which is free for guests who make reservation for the restaurant.
Web: Kizkulesi.com.tr

Galata Tower Restaurant.
Address: Galata Kulesi, Sishane, Istanbul
There is a tourist restaurant at the top floor of famous Galata Tower, which had 360 degree view of Istanbul. Galata tower is a medieval stone tower in the Galata district of Istanbul, Turkey, just to the north of the Golden Horn.
Web: Tripadvisor 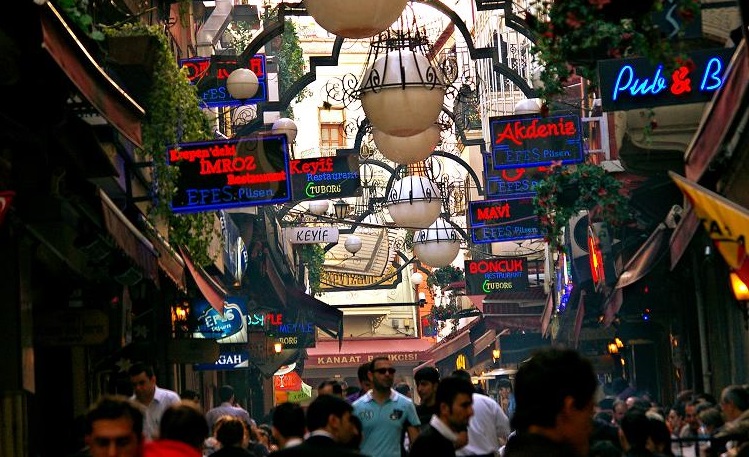 Nevizade Street
The famous Nevizade Street, which has rows of historic pubs and fish restaurants next to each other. It is located behind Cicek Pasaji close to Galatasaray square on Istiklal avenue. It is the traditional night -life area of Beyoglu and always busy, if the weather is fine. Cicek Pasaji itself is also a famous venue with many restaurants located next to each other along the L-shaped passage passing through the historical building. Cumhuriyet Restaurant is one of the oldest and most popular restaurant out of many others on Nevizade street. Click here for Google Map

Asmalimescit
The narrow back-streets near Tunel (the other end of the Istiklal avenue with respect to Taksim square) has rows of traditional Turkish restaurants and Ocakbasi (grill) houses. The restaurants are concentrated mainly on  Asmalimescit and connecting Sofyali streets. Previously the neighborhood had an a more intellectual atmosphere as a meeting point of artists, painters etc, but later become more commercialized with the opening of new restaurants. The restaurants are average priced, but there are alternative places dotted around where cheap-bear and food will be available. It is usually very busy on weekend evenings.

Kumkapi Quarter
Kumkapi is famous traditional fish restaurant street/quarter close to the coast of Marmara sea, behind Sultanahmet with respect to Golden Horn. It is mostly frequented by local people as well as tourists. The restaurants are next to each other along several small streets, and all put tables outside in summer. Local musicians wander from one restaurant to another playing traditional music, expecting to be tipped. During late Ottoman period Kumkapi was mostly inhabited by Armenians, who still have a community school and several churches there. It is also the seat of the Armenian Patriarchate of Constantinople. It is best reached by a short taxi from Sultanahmet. Kumkapi has a station on the suburban train line Sirkeci-Halkali.
Click here for Google map locating Kumkapi restaurants' street

Vegan restaurants are concentrated around Kurabiye Sokak  (street) connecting to Istiklal via Zambak Sokak near Taksim Square. Parsifal, Zencefil Cafe are good samples of venues where you can eat vegetarian food. There are several other vegetarian restaurants in other parts of Istanbul, naturally.