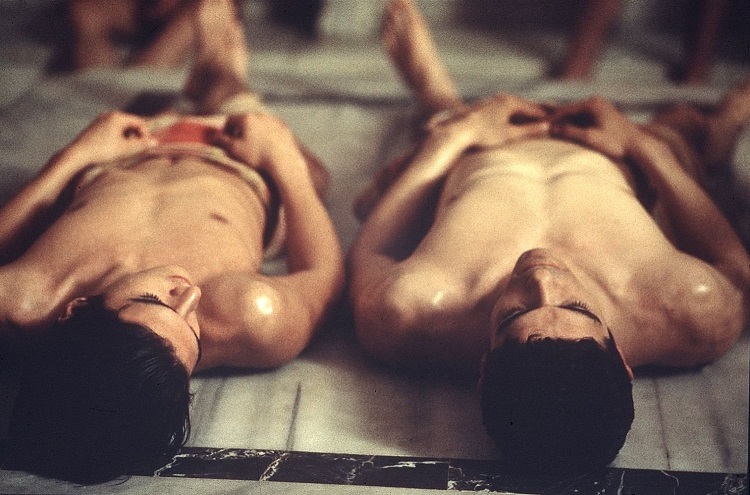 Most of the venues listed on the website without the approval of their owners and they are not necessarily gay or gay friendly venues. You can find more detailed information about gay friendly sauna and bath houses on Turkish Bath Guide.Com website, including location maps and reviews of the people who have visited them.

The bath houses are day time venues and most of them closes around 10 p.m. They are usually busy after work hours; in the evenings and and on Sundays. Most of the bath frequented by gays are located on some back-streets and they are not very close to each other. For that reason it is advised to make a comprehensive investigation in advance, if you are intending to visit several of them on same day.  Our Istanbul Gay Map will be very helpful for this purpose, being very practical and probably only up-to-date map of LGBT venues in Istanbul.

On this page we will also be listing historical and other none-gay Turkish baths. We would also like to help our visitors by informing you the venues which have already been closed down, although they may still be listed on some out-dated internet or printed gay guides:

Firuzagha Hamam. (10:00-23:00)
Address: Cukurcuma Cd. No: 6   Cukurcuma, Beyoglu
Web: TurkishBathGuide/ Firuzaga.htm
A small old Turkish bath house in Beyoglu. It is located at the end of Cukurcuma street is which is famous with the antique shops all around it.  You can find most easily by walking down from Galatasaray Square, the middle of Istiklal avenue, or walking up from Tophane tram station

Cihangir Sauna
Address: Altipatlar Sokak, No: 14 Cukurcuma / Beyoglu / Istanbul
Web: TurkishBathGuide/ Cihangir.htm
Located on a back-street near the beginning of Cukurcuma street.  It is not a traditional Turkish bath. Basically it has a sauna, some kind of a dark room, showers and a cafe-lounge area.

Following hamams are not gay venues, but are recommended to people who wants to experience the atmosphere of a real historical & traditions Turkish bath.

Ayasofya Hamam
Address: Cankurtaran Mahallesi, Ayasofya Meydani No:2, Sultanahmet, Istanbul
Ayasofya Hurrenm Sultan Hamami is the most luxury and fairly expensive historical Turkish bath located at the very center of historical Sultanahmet district, across from Santa Sophia. It was commissioned by the Ottoman Sultan Suleiman's consort, Hurrem Sultan, and constructed by well-known architect Mimar Sinan during the 16th century. The building was used as a carpet store until 2007. After a three-year-long restoration project that began in 2008 and cost US$11 million, the bath-house re-gained its glory with its opening in May 2011.

Galatasaray Hamam
Opening Hours: 08:00 am-10:00 pm
Address: Turnacibasi Sokak No: 24 Beyoglu, Istanbul
This hamam was used exclusively by men for almost 500 years. This all changed in 1963 with the addition of a small section for women. However, aside from this little addition, not much else has been altered. It was originally built in 1481 during the reign of Beyazit II and contains many pretty details, such as the intricate tile work at the entrance to the steam room in the men's section. One major feature here are the marble slabs where bathers can be massaged in semi-privacy rather than on the heated central navel stone. The admission price includes a full service, including massage.

Cagaloglu Hamam
Address: Prof. Kazim Ismail Gurkan Cad No:34   Cagaloglu, Istanbul.
Web: Cagalogluhamami
Cagaloglu Hamam ("hamam" means Turkish bath) was built about 300 years ago on an area of 2834 sq.mt It is considered the last sample of its category and the architectural design is astonishing. It is open everyday. The bathing hours for men are 07:00 - 22:00 and for women 08:00 - 20:00 hours. It also has a café as famous as itself.  Located across from the Iranian Consulate.

Cemberlitas Hamam
Address: Mollafenari, Vezirhan Cd. No:8, 34440 Fatih / İstanbul
Web: Cemberlitashamami
It is located in Sultanahmet, near the Grand Bazaar (there is Cemberlitas tram station right across the entrance). This hamam built in 1584 was very popular among the Ottoman Sultans. It is considered to be one of the most important examples of 16th century Ottoman architecture. 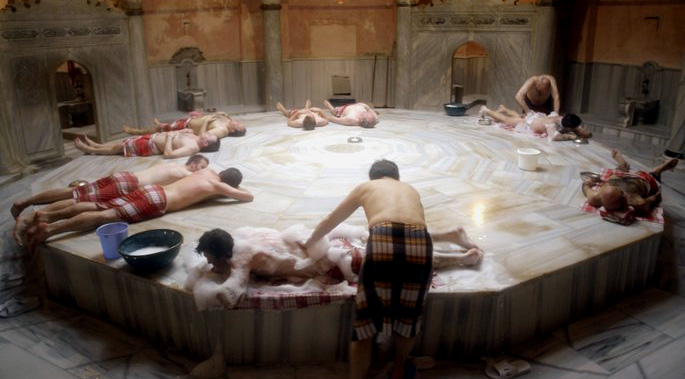 Other None-Gay Small Hamams in Istanbul

Most tourists do not like to be in places where there are only other tourists and understandably want to experience the original places where local people go. Although above listed bath houses are easier to find and better samples of historical Turkish baths we would also like to introduce several other good samples of less-known local Turkish baths. Actually, there is always a possibility bumping into people interested in gay-affair in such less touristy bath houses. Intimacy is highly recommended in such cases.

Horhor Hamam.
Address: Hamam Sokak, No:8 Aksaray/Istanbul.
A small historical non-touristy hamam located in Aksaray quarter of Istanbul's Fatih district. It can be confused with Sofular Hamam (see below) in the same vicinity known as Horhor, It is located close to Aksaray Metro station, on a small back street

Tarihi Sifa Hamamı
Address: Sifa Hamamı Sokak No:24  Sultanahmet / İSTANBUL
Web: Sifahamami.com/
Not to be confused with Yesildirek Sifa Hamam, also listed above, if you make a Google search. This is a small but historical hamam (Turkish bath) located in historical Sultanahmet district. Most of the clients are tourists because of its location.

Sofular Hamami
Address: Sofular Caddesi, No: 28 Aksaray/Istanbul.
Web:  sofularhamami.com
if you are looking for a local and not expensive one Sofular hamamı near Horhor street in Aksaray, Fatih district is the place. Horhor street area is also the oldest antique market in Istanbul. This is a 16th century hamam with two-story dressing cabins and an elegant pool with fountain. There are separate sections for men and women. Tea, coffee and soft drink services are available. Google map


The Turkish hamam (also Turkish bath or hammam) is the Middle Eastern variant of a steam bath, which can be categorized as a wet relative of the sauna. They had played an important role in cultures of the Middle-East, serving as places of social gathering, ritual cleansing and as architectural structures, institutions, and (later) elements with special customs attached to them. Europeans learned about the hamam via contacts with Turkey hence the European name for it: "Turkish" hamam.

Taking a Turkish bath firstly involves relaxing in a room (known as the warm room) that is heated by a continuous flow of hot dry air allowing the bather to perspire freely. Bathers may then move to an ever hotter room (known as the hot room) before splashing themselves with cold water. After performing a full body wash and receiving a massage, bathers finally retire to the cooling-room for a period of relaxation.

In Turkey, the advent of modern plumbing systems, showers, and bathtubs in homes caused the importance of hamams to fade in recent times.

A typical hamam consists of three interconnected basic rooms similar to its Roman ancestors: the sicaklik (or hararet -caldarium) which is the hot room, the warm room (tepidarium) which is the intermediate room and the sogukluk which is the cool room. The sicaklik usually has a large dome decorated with small glass windows that create a half-light; it also contains a large marble stone at the center that the customers lie on, and niches with fountains in the corners.