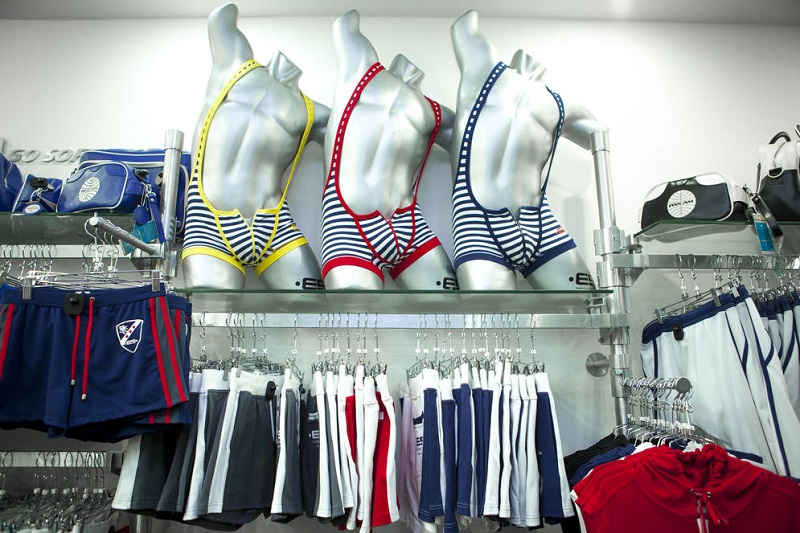 Limbo Concept
Attention: This place has been close in April 2017
Address: Istiklal Cad. No:108/11 , Zemin Kat, Aznavur Pasajı, Beyoğlu, Istanbul.
The first and only LGBT shop in Turkey opened in early 2014. This small and lovely shop is located at the basement floor of Avnavur Pasaj. Aznavur Pasaj is well-known historical shopping mall on Istiklal Avenue near Galatasaray square which houses mostly souvenir shops. They sell variety of textile and other LGBT products which are hard to find elsewhere in Istanbul such as various souvenirs and rosettes designed for LGBT people, rainbow flags, home accessories, lighters, wristbands, candles, earrings and other ornaments, underwear, jeans, t-shirts, products designed for especially for bears etc. It would be nice of you to support this small gay business if you intend to buy a small presents for your friends from Istanbul before going back home...
Web: Facebook.com / limboconcept

Sun Vital Solarium
Address: Valikonagi Caddesi Sair Nigar Sokak No.1, Kat 2 Nisantasi / Istanbul
Web:  Facebook.com/sunvitalnisantasi
A modest lesbian and transgender friendly solarium center in up-scale Nisantasi district. The prices are reasonable (around 10 $ per session). It is located on the 2nd floor and entrance is from the Sair Nigar side-street at the connection of famous Valikonagi street.

Istanbul has been a shopper's paradise for more than 1,500 years, famed as the trading point connecting the Silk Road from China with Europe. Here are major shopping spots of Istanbul

Grand Bazaar
The Grand bazaar (called Kapali Carsi-Covered Bazaar in daily local language) is a labyrinth of hundreds of streets accommodating thousands of shops near the old city. Main entrance of the bazaar is from Beyazit district. Grand Bazaar could mainly be recommended for tourist shopping or buying souvenirs. Shops selling same kind of products are gathered along the same street usually. For example, there are streets composed of shops selling only leather, carpets, jewelers, silver, tourist souvenirs, handcrafts, textile products, bags, belts, pottery etc.

Sultanahmet
Sultanahmet is the district at the heart of the old city housing the most famous tourist attraction of Istanbul. Sultanahmet is also famous with many carpet shops exhibiting the best selections of hand made Turkish carpets, rugs and kilims. Traditional Turkish carpets are most famous in the world with their designs reflecting the pure and innocent feelings of the eastern people. Some of these carpets are masterpieces of art competing with the paintings of Renaissance painters.

Istiklal Caddesi
The central street of the town of Beyoglu, starting from Taksim square, ending at Tunel district. This street is closed to the traffic all the way and divides the night life area into two, where most of the gay venues are also dotted around. The shops along the street are mostly dress shops selling fashion products of different kind and quality. There are also various restaurants, a few leather shops, bookstores, music shops along the street. The night life is mainly on the narrow side streets connecting to Istiklal.

Nisantasi
The up-market shopping district of Istanbul. You can find the most famous brand names of the world such as Mango, Armani, Gucci, Hugo Boss as well the most trendy local fashion shops competing with them in quality and style in this area. Neighborhood of Tesvikye / Nisantasi is where Turkey’s top designers have their outlets. Good streets to try are those around Valikonagi Caddesi and Abdi Ipekçi Caddesi. Turkey is a major textile producer and exporter in the world. Many of the international brand-names are also being produced in their factories in Turkey.

Cukurcuma
Cukurcuma is a part of Beyoglu district that sometimes fell prey to time but always regained its popularity. Even if it is known as a center where old objects of the Ottomans are collected, it is actually the meeting point for antique lovers While walking around Cukurcuma you see that each antique shop has a different style. Designs of shops and objects reveal inner worlds of their owners. At the same time periodical changes in Cukurcuma cause changes in objects that are purchased and sold. Click here for Google map locating Cukurcuma street

Tahtakale
A maze old traditional shopping streets, manly inhabited by Turks from allover the city. Tahtakale, Uzuncarsi and Kasircilar Streets are the ones you must see alllined with shops selling turned wood, kitchen items, new and used clothing, toys, backgammon sets, and everything imaginable. The streets are very busy with human traffic (no cars allowed) filled with shoppers, porters carrying huge loads, cars and trucks trying to deliver goods to the shops, which sell beads, fire arms, luggage, mosque decorations, apparel—anything and everything.

There are many shops and fashion boutiques at different malls in several districts. In these malls you can easily find modern shopping items at very attractive rates besides well-known brands from fashion centers of the world.

Demiroren Istiklal
The location of this mall makes this one a unique mall. Though the building seems to be in-line with the other original buildings in that street, a shopping center does not fit the wind of Istiklal avenue where there are already many independent shops selling similar products. In Demiroren you'll find around a dozen of dress shops, a couple of fast food-chain restaurants and a huge techno market at the basement floor. There is a cinema at the top floor, and the entrance is designed very creatively.

Cevahir
Opened on October 15, 2005, Cevahir is a modern shopping and entertainment center located in the Mecidiyekoy district of Istanbul, Turkey. Cevahir Mall is the largest shopping mall in Europe, and the second largest shopping mall in the world.1. It has a direct connection from the second subway station (Mecidiyekoy / Sisli) when you depart from Taksim. Cevahir is attracting the middle class and younger people, more.

Istinye Park
Istinye Park is a deluxe shopping center over international standards, located in the Istinye quarter of Istanbul, with 291 stores, 85,250 sqm of retail area, and four levels of underground parking. The center includes an authentic Turkish food bazaar- a traditional market place, inspired by Turkish architecture and history. Istinye Park is comparatively far from city center.  The nearest metro station  ITU / Ayazaga is about 1 km away; from where you can take a taxi, public bus or walk a while.
.
City's Nisantasi
City's Nisantasi, opened in 2008, is a Saks Fifth Avenue style shopping mall which aims at the high-end consumer group and is mostly dedicated to the famous fashion brands.

Kanyon
Kanyon Shopping Mall is located at 4. Levent quarter. Fourth Subway station from Taksim. Right at the heart of Istanbul’s hustle and bustle, a new concept has awakened, turning heads, inspiring gasps of wonder, and changing notions of what contemporary urban life can look like. Kanyon’s four winding retail levels offer unique views of a shifting landscape as well as a passageway to some of the world’s best brands. It is defines as modern Grand Bazaar by some people.

Metro City
Metrocity, opened on April 30, 2003, is a modern shopping mall in the finance and business quarter of 1. Levent in Istanbul, Turkey with a direct connection to 1. Levent subway station. (4th station from Taksim) The complex is comprised of a 24-storey office tower and two residential buildings, each having 26 floors. Metrocity features 140 stores offering international and domestic labels, variety of restaurants and cafeterias on 4 floors with a covered area of 60,000 m²

Akmerkez
Akmerkez is located near Etiler district, favorite residential area among the elites of Istanbul. In 1995, ICSC honored Akmerkez with the "European Shopping Center" The Akmerkez complex covers an area of 180,000 m² and is comprised of a four-storey shopping area, with two towers offering 14 and 17 stories of office space, and a third tower with 24 stories of residential areas