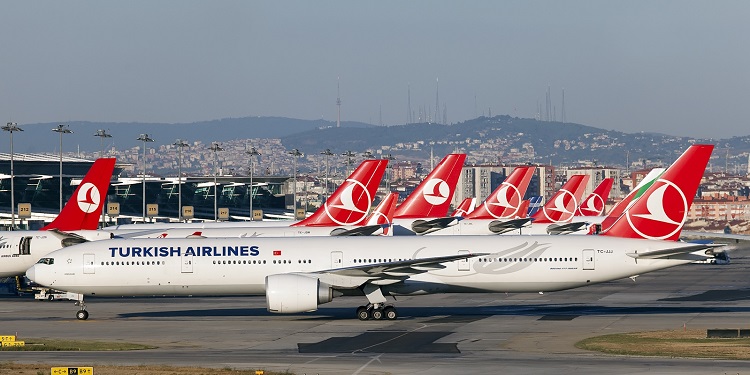 Sabiha Gokcen International Airport, opened in 2001. This airport, with a capacity of 3 million international passengers per year, is on the Asian side of Istanbul, 42 km away from Taksim Square in the city center.. Havabus is the airport bus provider offering shuttle services to Taksim Square with departures linked to the flights.

See below for public transportation option from Istanbul's airports to city center.

Airlines
Most major European airports are 2-4 hours away from Istanbul by air, and from the east coast of North America it is about a 10-hour journey.  Istanbul is readily accessible from all parts of the world, and served by more than 50 airlines. Turkish Airlines (THY) is the national carrier. Turkish Airlines (THY) offers direct flights from 77 cities around the world.

Istanbul Airport (New Airport) was fully opened opened on April 6th 2019. It may take up to 1 hours to reach city center, depending on traffic conditions of the time you arrive. There is no direct subway connection to the new airport, yet.  A taxi ride should cost around 25-30 US Dollar from airport to Taksim square.. You can also use HavaIst Airport Shuttles to come to Taksim Square, Yenikapi (closer to M1 Metro Line and old city Sultanahmet) and 15 Temmuz / Esenler Bus terminal (connected to M1 Yenikapi metro, with interchange station at Aksaray to Sultanahmet / Kabatas T1 tramcar line). HavaIst tickets are sold on the buses and will cost around 3-4 US $). It may take 1 hour or more to reach to the city center, depending on traffic conditions at the time you arrive.

Sabiha Gokcen International Airport on the Asian side of Istanbul, 42 km away from Taksim Square. Transportation with standard public transportation would be very difficult for the tourists. The most comfortable and comparatively economic way of getting to Taksim from Sabiha Gokcen Airport is using privately operated Havabus airport shuttle buses. Tickets are sold on the buses and will cost you around 3-4 US $. They depart every half an hour (last departure from airport is at 01:00 a.m). Havabus shuttles do not go to old city / Sultanahmet district, You need to use additional M1 metro, M1 tramcar combination or a short taxi ride from Taksim to Sultanahmet.  An honest taxi ride should cost around 30 US Dollar from Sabiha Gokcen Airport to Taksim square.

Public buses are operated by IETT company, a corporation owned by Istanbul Municipality. There are public buses to almost every corner of the city. There are also "private public buses" (Ozel Halk Otobusu) which are also operated under the control of IETT. Although they are owned privately, the pricing and ticket system is the same. In 2009 an express public bus system was launched between major locations, known as Metrobus. As the name suggests, these are big buses running on a lane assigned only for them on the main roads. Thus they move faster, independent form city traffic. Metrobus lines combine outer residential districts of the city and are not very useful for tourist transportation.

Marmaray line, a 76.6 km (47.6 mi) long commuter rail line, comprising a subway rail tunnel under the Bosphorus strait, and the modernization of existing suburban railway lines along the Sea of Marmara from Halkalı on the European side to Gebze on the Asian side. Marmaray line is rather useful for people living in Istanbul than tourists, which combines the residential districts on European and Asian sides of Istanbul.

If you will stay in the city more than one week and your intention is to use public system very often, it is highly recommended to buy Istanbul Kart (Card), which can be purchased and refilled at kiosks available in central bus and metro stations. Istanbul cart can be used for all public transportation systems, including IETT buses, ferryboats, subway, light metro and trams. Otherwise, public transportation tickets and tokens can be obtained from ticket automats or from kiosks near major stations. Public transportation with IstanbulKart for one way costs roughly around 0.5 US$ in Istanbul (based on volatile exchange rates). After first use of Istanbul card, you get approximately %30-40 discount for maximum 5 different "combining lines" you take within 2 hours. Ticket costs will be deducted from the amount of money you deposit into your Istanbul Card in Turkish Lira.

Kabatas ferry pier (vapur iskelesi) can be reached by funicular from Taksim square, and by T1 tramcar from old city, Sultanahmet. Eminonu / Sirkeci ferry piers are located some 10-15 minutes walking distance from Sultanahmet square, can also be reached by the tramcar. Yenikapi sea bus pier is located on the coastal part of Aksaray district, some 10 minutes walking distance to Aksaray tram station at town square.

Most enjoyable ferryboat journey would be taking the morning Bosphorus cruise (Bogaz turu) of Sehir Hatlari from Eminonu to Sariyer. Bogaz turu takes a little over an hour and it stops at several other small towns and fishing villages along the Bosphorus. You can also book guided half day morning / afternoon Bosphorus tours including transfer from your hotel.

Istanbul's International cruise port is located centrally not very far from Taksim and Sultanahmet, in Salipazari, Karakoy district. Huge ships of international cruise liners dock here. Western tourists who arrive in Turkey by cruise liners and sleep on the ship are allowed to enter Turkey without a visa, with the permission given by the local custom authorities as soon as you set foot ashore.

Most intercity buses and coaches terminate at the colossal Esenler Otogar, about 10 km west of the city center, located on the European side. The station can be easily reached via the Otogar stop on the M1. Companies may also have courtesy minibuses or taxis which will allow you to easily access the center of the city. Buses depart/arrive for all regions of Turkey as well as for international destinations including cities in Bulgaria, Greece, Republic of Macedonia and Romania. The terminal is huge and each company has a separate office. "Harem Otogar" is the major hub for the buses on the Anatolian (Asian) side, which can be reached easily from the European side with a Ferryboat. Turkish bus companies mostly don’t have a toilet inside the buses. Buses stop for rest and needs usually every 4 or 5 hours. Rest duration is around 30 minutes.

Trains to Europe via Bucharest or Sofia historically ran from Halkali, terminal station combined to the Marmaray metro & rail system that connect to city center. Trains are not as popular as intercity coaches for long distance transportation, with a much smaller and less frequent network. There are rail connections from Istanbul to Ankara, Izmir and some Eastern Anatolian cities. Trains are old-fashioned and most of the services are much slower than buses, although between the three main cities there are Mavi Tren and Ekspres trains which are faster and more comfortable.  High Speed Railways in Turkey began service in 2009. Turkish state railways company, TCDD  has branded its high-speed service as Yüksek Hızlı Tren or briefly YHT. High speed trains currently operates on two lines: the Ankara - Eskişehir portion of the Istanbul - Ankara high-speed railway and the Ankara - Konya high-speed railway, which opened in August, 2011. Reservations are essential for intercity journeys, and there are several classes of seats and sleepers.

Other Practical Travel Information for Istanbul:


Please remember that the exchange rates on this table are average rates. The exchange offices and banks applies higher rates when you sell a foreign currency, lower rates when you buy it. You can also exchange popular international currencies - mainly Euro and US Dollars - in other places such as big markets, dress shops, restaurants, hotels, night clubs etc if you buy something from them. Tourist hotels would exchange money without buying anything. But note that they will charge extra commissions in these places; roughly around 5- 10 %. For this reason it is wise to change your money during office hours in day time at the banks or private money exchange offices, since there are many of them in central districts. Changing money at private exchange offices are much faster because they only deal with money-exchange, while you will need to wait in line for a while at the banks. Also avoid exchanging a lot of money at the airports, where the rates are also not very favorable. Do not trust taxi drivers with money exchange. If you need a taxi ride to get away from the airport, either bargain them for a fixed price in Euros / US Dollars, or buy a small amount of Turkish Lira at the airport, sufficient to reach your hotel or city center.

Tourist Information Offices
Tourism Information Offices provide the information and documents about Istanbul like brochures, leaflets maps etc. for local and foreign tourists. Both the firstcomers and repeat visitors have the opportunity to learn about the developments about Istanbul from our experts.
Note: All of our offices, except Taksim Tourism Office, serve during official and religious holidays. Visiting hours and days are everyday between 09:00 - 17:30

6 - Galataport
Address : Kılıçali Paşa Mahallesi, Meclis-i Mebusan Caddesi Beyoğlu / Istanbul (Customs area)
The hours of the Information Office is planned according to the arrival and departure of the ships.

Newspapers and Magazines:
Foreign newspapers and magazines are available in big cities and tourist areas. Also there is also Hurriyet's Daily News published in English which covers international and local news .

Tipping:
At various establishments like hotels, restaurants, Turkish baths, barbers and hairdressers, tipping at a rate of 5%-15% of the total is common. Taxi and "dolmus" drivers on the other hand, do not expect tips or even rounded fares.

Visiting a mosque:
Before entering a mosque, Muslims wash themselves and remove their shoes. Foreign visitors should also remove their shoes and show the respect they would any other house of worship and avoid visiting the mosque durin prayer time (5 times a day). Women should cover their heads and arms, and not wear miniskirts. Men should not wear shorts. (In certain famous mosques, overalls are provided for those not suitably dressed.)

Local time:
GMT+3 hours all seasons .
Attention:  In 2016 Turkey adopted daylight saving time for winter period also which was being adjusted only in summer. The time zone is constantly GMT + 3 thereafter.

Water:
Although tap water is safe to drink since it is chlorinated, it is recommended to get advice from the concerned authorities of the places resided.

Tourist visa procedure for Turkey considerably differ depending of the nationality of visitors, but it is easy in most cases. Since 2013 Electronic Visa application system was launched which can be obtained online.

The Electronic Visa (e-Visa) Application System was launched on 17 April 2013 by the Ministry of Foreign Affairs of the Republic of Turkey. This system allows visitors traveling to Turkey to easily obtain their e-Visas online in approximately three minutes. It is possible to obtain e-Visa 7/24 at everywhere with internet connection. The applicants can obtain their visa after they fill in the necessary information concerning their identity, passport and travel dates and pay visa fee online.
For detailed information please click here