Information about gay bars and clubs in Istanbul 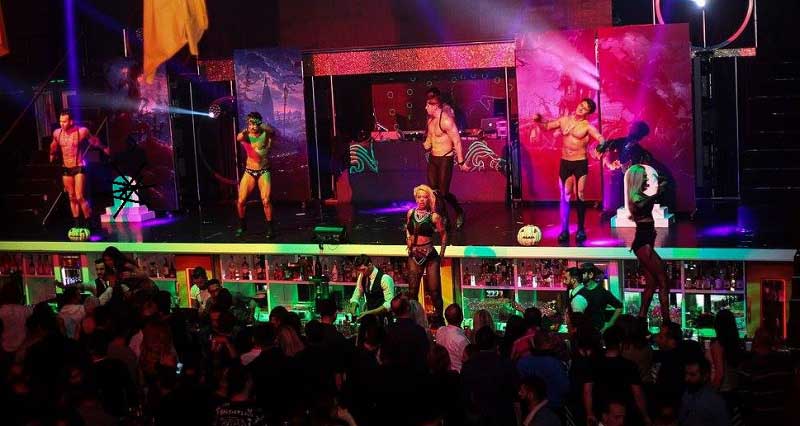 Istanbul's gay night life is more visible around and after-midnight. Majority of the gay night clubs are not busy enough until 01:00 am, but there are a considerable number of gay bars open and vivid before midnight as well.  In Istanbul, gay bars and clubs are busiest on Saturdays nights as everywhere else. Friday nights are also busy enough if not as much. Tuesday and Wednesday nights would be vivid in comparison to the other mid-week nights, but this also depends on special events organized in each venue. Mondays would be the least popular night of the week when most trendy gay night clubs would be closed. The gay bars and clubs would also be busier in winter compared to summer season., when many local people leaves the city for summer holidays. Hence, Istanbul's gay night life becomes more quiet especially in July and August when some venues may close their doors for a few weeks for renovation and restoration. There are no dark rooms in most gay bars and clubs and sexual intimacy is not allowed principally, but usually kissing, hugging etc is well received.

Prices:
Contrary to expectations, the gay bars are not cheap in Istanbul - unlike other items of the daily life.  This is mainly because the taxes are high and drinking habits of Turkish people are low. So, do not automatically think that you are being overcharged because you are a tourist. The price of one drink roughly ranges between 5-7 US Dollars for local drinks, 10-15 US Dollars for "imported drinks" (such as Whiskey, Malibu, Safari, Gordon Gin, imported Vodka etc.). The venues accept cash payment in Euros and US Dollars but they apply unfavorable exchange rates. Most venues would accept payments with credit cards, but not all. So, it is will be convenient to have some cash in Turkish lira on you when you go out to gay bars and clubs..

Orientation:
You will notice that almost all gay bars and clubs are located in and around Taksim & Beyoglu. Do not get confused with Taksim and Beyoglu districts, when you see the venue addresses. The official municipality is called Beyoglu (historical Pera district). Taksim is the central neighborhood of Beyoglu, at the northern end of the town. Very famous pedestrianized avenue Istiklal Caddesi also starts from Taksim square, cutting Beyoglu town into two parts. The area starting from Taksim Square all the way down to the Golden Horn on the southern-end are all within Beyoglu municipality borders. That is, if the address contains Taksim, the place should be closer to the north of Beyoglu.

Useful tips for finding the venue addresses:
Cad. = Caddesi (read: Jad-de-see) = Main street/avenue
Sok. = Sokak= Side street or small lane/alley.
Ilkyaz Apt. = Ilkyaz Apartment, name of the building, if there is one.
Kat: 3 = On the 3rd Floor
No:23/4 = Here 23 Refers to the number of the building on that street. It follows as 2,4,6... , on one side, 1,3,5... on the other side of the street. 4 refers to the number of the flat / apartment / floor
Click here for up-to-date Gay Map of Istanbul
Click here for detailed information about public transportation in Istanbul.

These are the venues open and vivid before midnight as well.  Most of these gay bars are open everyday and they are more crowded between 21:00-02:00 a.m, though this may differ for each venue and from day to day. The prices in these bars are slightly cheaper than gay night clubs (listed below), and they do not need entrance or cloakroom fees. Most of them organizes activities, shows, karaoke nights and live music performances on several nights off the week. It is advised to check their Facebook pages to find out when / what kind of shows they are offering

Mor Kedi Cafe & Bar (20:00- 02:00)
Address: Istiklal Cad. Ipek Sokak 16, Kat 3, Daire 5 - Beyoglu, Istanbul
Web: Morkedi Cafe (Click for guest reviews, videos, pictures and more)
More Kedi is one of the most senior gay cafe bars in Istanbul. It is a place that may get busy before all others gay bars. Usually there will be some people from 6 p.m  until around midnight. Clients are mostly younger gays, but any ages are welcomed. In August 2020 they bought the rival Chaplin Cafe  and moved to their address, where Chaplin Cafe used to be located, after operating on Imam Adnan Sokak for almost two decades

Rocinante Bar (20:00- 02:00)
Address: Ogut Sokak, No:6, Kat 2 (2nd floor),   Beyoglu, Istanbul.
Web: Rocinante Bar  (Click for guest reviews, videos, pictures and more)
Rocinante was a gathering point for Turkish lesbians in mid 2000's. It was later turned into a mostly male gay bar but then closed down for about a year. They offer live music and other modest shows on different days of the week. More busy around 22:00-01:00 a.m.

Chianti Bar (20:00- 02:00)
Address: Kameriye Sokak, No:10/A, Nevizade, Beyoglu, Istanbul
Web: Chianti Bar  (Click for guest reviews, videos, pictures and more)
A homely gay cafe & bar which opens in early hours of the day but it is more busy in the evenings and around midnight. It's like a quiet chill-out cafe in late afternoon until it gets more busy and louder after around 9-10 p.m.

Majority of the gay night clubs listed under this category are busy after midnight. Although they open their doors by 22:00-23:00 o'clock, the action does not start before midnight. Without exception, the music is loud in all of these after-midnight clubs; playing a mixture of Turkish pop, western pop, techno and underground music in turns. Most these night clubs in Istanbul require entrance fee on Saturday nights and sometimes on Friday nights, but you can get one "local drink" with your ticket. Typically, there are several security guys waiting at the door of each gay bar/club.  They are there to stop some unsolicited visitors and take care of the cloak-rooms. In winter season, the clients are expected to leave their large bags, jackets and coats at the cloak rooms and pay for it some kind of compulsory tip when they leave.

Stay Club (22:00-05:00)
Address: Imam Adnan Sok, No 8, Kat 3 Beyoglu, Istanbul
Web: Stay Club  (Click for guest reviews, videos, pictures and more)
Popular night club due to it's very friendly and liberal atmosphere, Stay Club was opened in 2020 on the 3rd floor of a building on a by-street along the Istiklal Avenue, around 6-7 minutes walking distance from Taksim Square. Please make sure to go to the right place because other clubs in the same building can be really expensive. After entering the building, climb to the upper floor by stairs and then take the elevator to the 2nd floor, where the name of the venue is written next to the elevator button.

Tekyon Club (23:00-05:00)
Address: Siraselviler Caddesi, No: 63/1, Taksim, Beyoglu. Istanbul.
Web: Club Tekyon  (Click for guest reviews, videos, pictures and more)
Most popular gay club in Istanbul since early 2000's even though it moved to different addresses several times, the last one being a bigger place on Siraselviler, in 2009. The prices are average The venue is very big for the capacity of gay nightlife in Istanbul and consequently it is getting less crowded especially during the week-in days but it is almost always very very busy on Friday and Saturday nights, including its big back-garden which give an opportunity to smokers.

Love Dance Point - 23:00 - 05:00 (Friday-Saturday)
Address: Cumhuriyet Caddesi, No: 349 Harbiye, Sisli, Istanbul
Web: Love Club  (Click for guest reviews, videos, pictures and more)
This night club is located in Harbiye quarter, on the main avenue about 20 minutes walking distance to Taksim Square. It is open on Friday and Saturday nights. Saturday is the most busy night and there are some good shows usually.. If it is the first time you are going there it is hard to notice the venue at first sight. Visit club's webpage for detailed location info and the map.

Club Cheeky - 01:00-07:00
Address: Tarlabasi Bulvari No: 32 Taksim, Istanbul.
Web: Cheeky Club  (Click for guest reviews, videos, pictures and more)
This is an exceptional after-hours night club open on Fridays and Saturday nights. It is usually not busy before 02:00- or even 03:00 am, attracting LGBT people after all other gay bars and clubs closes down.  It is located very close to Taksim Square, next to Cartoon Hotel. Cheeky has moved to new address in mid 2014. It had a small darkroom in the previous venue which was the main reason of its popularity. The upper floor of the new venue is said to be functioning like that sometimes.

X-Large Club - 23:00-05:00
Address: Ataturk Oto Sanayi Sit. 52.Sok. No:12/1, Maslak, Sariyer / Istanbul
Web: Club X Large  (Click for guest reviews, videos, pictures and more)
When X Large Club was first opened in Beyoglu, Kallavi Sok in late 2000's and it is was overwhelmingly gay. What made the club very popular was the quality of the shows. Around 2013 X Large moved to a bigger venue somewhat 15 km outside city center. It is still a gay friendly venue and attracts many LGBT people, but majority of the clientele are straight people including many women.  Famous Turkish singers and popular Turkish DJ's offer performances in the venue.

The venues in below section have little or no visible gay scene, but gay people can feel more comfortable then other straight venues..


The venues which no longer exist
Following venues has been closed-down completely for various reasons. We are listing them just to let people know because some of them are still being listed on many other internet websites and gay guide books, including Spartacus and Google maps. Please note that Istanbulgay.Com is published by local gay people living in Istanbul and updated instantly with the latest information about the gay venues in Istanbul which you can not find anywhere else.

Following gay venues has been closed-down at least 5 years ago some of which may still be listed on some international gay websites: